“From the oldest materials, creating the present” 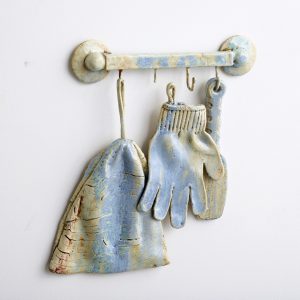 Yuri Kezuka spent every day of her childhood playing with clay in the atelier of her father, who was a potter. For university, she joined the Department of Crafts and studied Ceramics. In accordance with the assignments set during the ceramics major, she mainly created vessels using the electric wheel, but soon realised she could not express herself as she wanted through these pieces.

Since then, Kezuka has been creating ceramic pieces with a concept, such as installation work. Common motifs are household items or indoor equipment. The concepts include spiritual problems that arise in humans, changing emotions, skepticism and irony regarding conventional societal beliefs, and philosophical observations.

Kezuka’s installation pieces, which carry a concept, are unusual in the world of ceramics. Contemporary ceramics tends to emphasise autonomy and formal elements (colour, form etc.), rather than the intention of the work itself or the background of its creation. Recently, more ceramic installations and conceptual pieces are being made, but they are still the minority.

Kezuka undoubtedly values the formal elements as well as the concept. In ceramics, there is a tendency to become deeply involved with limited materials, and to try to express and incorporate characteristics of the material, such as texture. Kezuka also feels the lure of ceramic materials, and actively tries to use the texture of the clay in her work.

Kezuka makes most of her pieces with “coil building”, which is one of the most primitive ceramic techniques. Earthenware discovered in ruins from over 10,000 years ago was found to have been made using this technique. The clay is stretched into a long string, and gradually stacked to form a vessel. Usually the layers are blended and merged, but Kezuka intentionally retains the pattern, to create the image of a whirlpool. The trace left by the piled up coils is suggestive of how individuals and humans of the past have walked a path of ceramics together through history.

In our era today, the immaterial world of the internet and data-based society have expanded rapidly due to the development of digital technology. In comparison, Kezuka’s work is extremely primitive. However, she believes that even if all sorts of things become replaced with digital versions, as long as humans are material beings, the sensitivity and desire for materials will never disappear. Nowadays many people work from their computer, and they yearn to form and shape objects with their own hands, resulting in them coming to take classes at her pottery school. Humans have been creating forms by hand since ancient times, and clay is one of the oldest materials that humans have been involved with. Creating art with this clay holds a deep meaning to Kezuka.

If earthenware is something that reflects ancient ideas and an ancient way of life, then Kezuka’s work can be likened to earthenware that reflects modern life. She utilises primitive materials to create modern objects that describe human activities of the present day.