Love (1-5) represents the stages of collapse of the human mind.
As the number increases, the degree of the damage increases.

The mind is compared to containers such as buckets and pots.
The tap is where affection can pour in from the outside world.

If the mind is healthy then you can accept affection from other people and their surroundings. However if it is damaged or broken in some way then this affection will leak out and the mind cannot be complete.

In this case, you cannot fulfill your own mind, begging in pain for some way to satisfy it.
The only thing left is death.

In the city there are many people, but the interpersonal relationships are chaotic and complicated, unlike the close-knit communities of the countryside.
Sometimes you don’t even know your neighbour.

I think that an independent life in the city is more likely to become a life of loneliness.

I took the stories of people living in the city, as well as my own experiences, and represented it as a set of five works called “Love”. 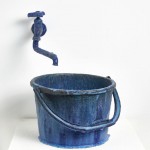 Love 1 (Bucket)
The mind is healthy so the container is big and can store a lot of affection. 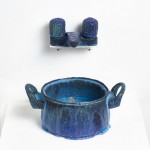 Love 2 (Pot)
The volume is small but it can still store affection. 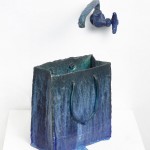 Love 3 (Paper bag)
As it is a paper bag the affection gradually seeps out, and at some point it will collapse. 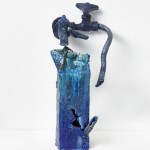 Love 4 (Milk carton)
With pain and damage, a normal amount of affection cannot fill the container.
Therefore it is necessary for affection to pour from multiple taps. 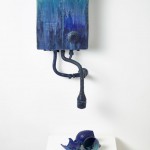 Love 5 (Water heater and broken glass)
Now completely broken, even if affection is pouring out, nothing can be stored.